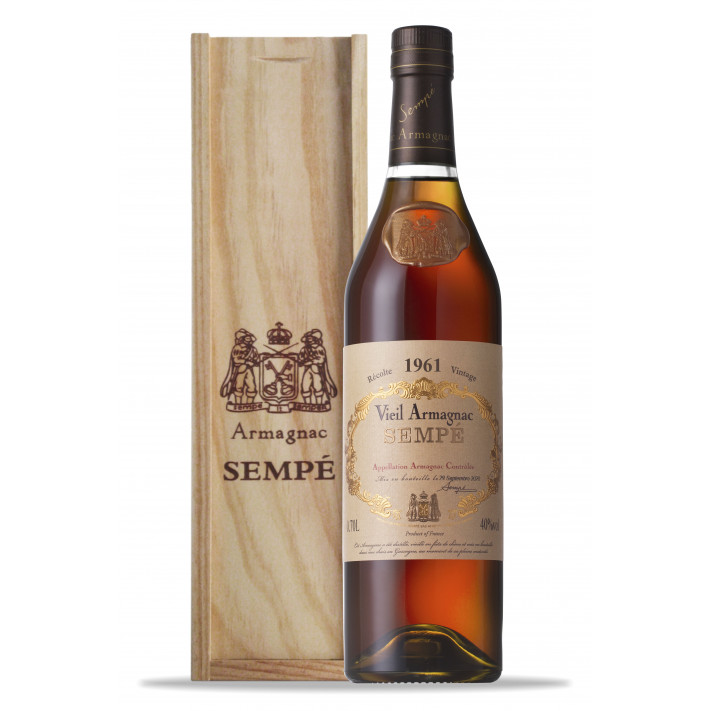 This luxurious vintage Armagnac has been made from distillates of different varieties of white grapes and aged in Gascon oak barrels for nearly half a century. Passed down from generation to generation, the Armagnac Sempé 1961 has been allowed to develop a stunning level of maturity before being bottled. For each vintage, successive cellar masters draw from carefully selected casks to preserve and develop spirits in keeping with their founder Abel Sempé's triple motto: ‘aroma, roundness, length’. This release is no exception.

Armagnac is a grape brandy produced in the Gascony region of southwest France, between the Adour and Garonne rivers by the foothills of the Pyrenees, as it has been since at least the 15th century. The terroir here is a mixture of sand and clay, spread across rolling hills drenched in sunshine during the long summer - resulting in dark, rich and rustic eaux-de-vie with concentrated flavors. The wood used for Armagnac casks is a particular wide-grained variety found in the Gascon forest, which has been toasted to a medium char to develop its sweetness and tannins perfectly. The wide grain allows for accelerated movement of the spirit in and out of the wood, creating depth of flavor and a well-developed aroma.

The House of Sempé is one of the best-known trading houses in Armagnac, founded in 1934 by Abel Sempé, a Gascon who worked tirelessly in the service of his country and his region. Known as a member of the resistance for the Armagnac battalion, he later served as Senator for the Gers for many years. He spread the Sempé Armagnac brand around the world in the 1950s and some of the stunning vintages he acquired can still be enjoyed today.

Shown in a classic ‘Milady’ bottle, this expression features a stunning label decorated with gold and a simple wooden presentation box emblazoned with the Sempé name. This would make a wonderful gift for anyone with a 1961 birthday or anniversary.

How to Serve Armagnac Sempé 1961

Such a well-aged vintage deserves time and attention: pour into a tulip glass and wait at least a minute before taking a sip, allowing the aromas to fully develop. The true complexity and depth of flavor will slowly reveal itself over time.