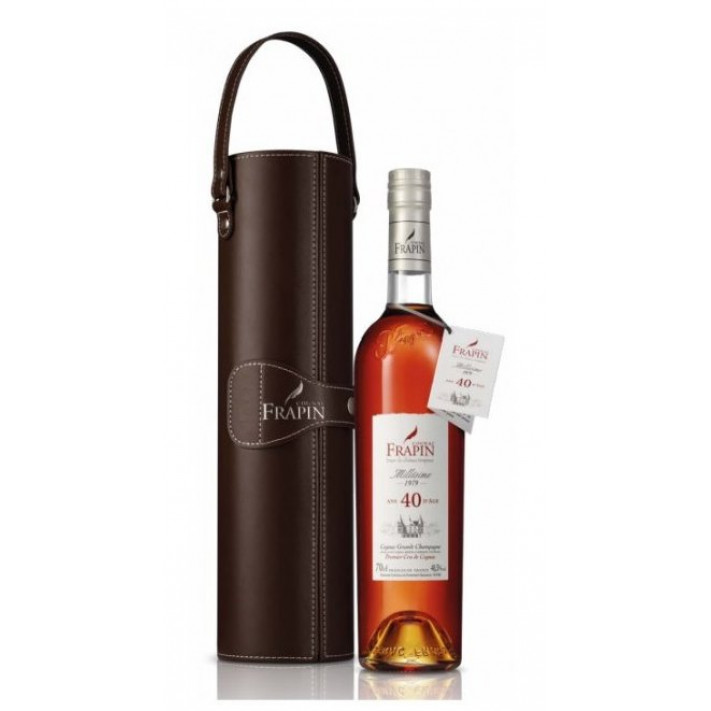 The 1979 vintage was the first vintage launched by Cognac Frapin in 1998. At that time, a barrel had been set aside to continue a longer ageing process, and after 40 years of waiting, the Frapin 1979 Trésors du Château Vintage Cognac was born. Produced from Ugni Blanc grapes and distilled on the lees, this Premier Cru Cognac comes from a 240-hectare vineyard characterised by limestone-studded clay soil and a crumbly limestone subsoil typical of the Grande Champagne terroir. The BNIC (Bureau National Interprofessionnel du Cognac) has guaranteed the authenticity of this Cognac as they have monitored the sealing of all barrels of Frapin eaux-de-vie.

Initially a family of winegrowers, the Frapin family have been settled in south-west France since the 13th Century. After taking up the craft of distillation, they have kept up production of eaux-de-vie for a staggering 20 generations, and the current head of the company is a direct descendant of the founder. The family’s established headquarters is at the charming Château de Fontpinot, nestled among their vineyards in the heart of Grande Champagne.

Today, Frapin Cognacs are entirely harvested, distilled and aged at the Domaine and the family are fiercely proud of their single-estate status. The House of Frapin control every aspect of production and eschew scientific methods, instead relying on age-old traditions - as well as the extraordinary palate of their Cellar Master.

The Frapin 1979 Trésors du Château Vintage is presented in a tall, straight bottle typical of the producer, with an elegant label displaying the age of the Cognac. Instead of a presentation box, this bottle comes with a stylish faux-leather carrying case.

The Frapin family has been around the Southwest of France since 1270. Always active in the domain of winegrowing, they specialized in distillation much later on and have since continued to stand strong throughout twenty one generations! The estate owns 340 hectares of land entirely in the Grande Champagne area, of which 240 are planted with vines. Frapin’s home in the beautiful castle Fontpinot in the town of Segonzac. The most famous family member was the 16th century author Francois Rabelais, after whom a prestigious Frapin Cognac bottle is named: The Cuvee Rabelais, rather fittingly, the house of Frapin is also the only Cognac estate granted permission to call itself a Chateau within the entire Grande Champagne cru. Alongside many other accolades, Frapin was the first Cognac producer to invent a multi-vintage blend, combining vintages of different years to create the perfect taste.