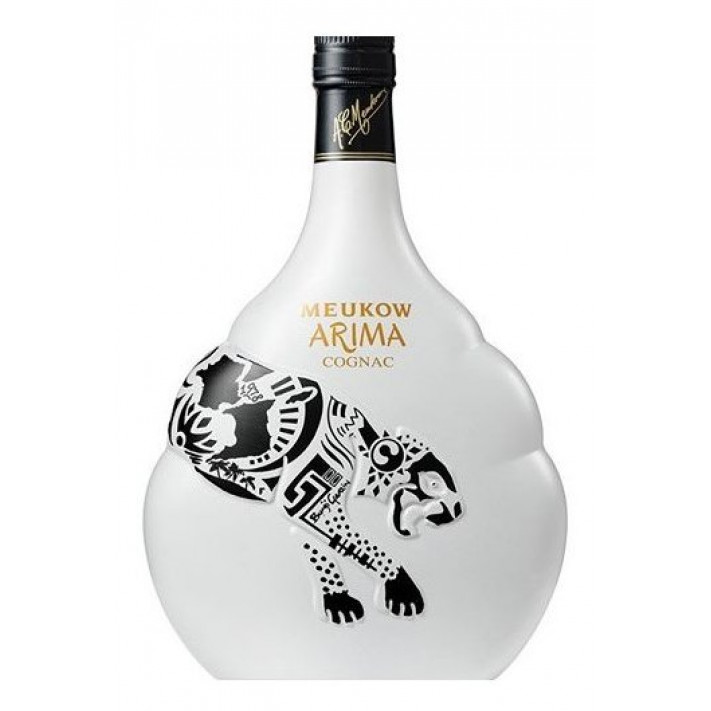 This special Cognac has been created as the signature blend of soca superstar Bunji Garlin. Aged for over four years in French oak, Meukow Arima Cognac uses eaux-de-vie from several grape growing areas, creating the perfect balance of elegance and roundness. Musician and producer Bunji Garlin is from Trinidad and Tobago, and has been at the forefront of reggae, soca and dancehall for decades. He was invited by Meukow Cognac to visit their estate and put his unique stamp on this great Cognac. The design of the graphics on the bottle are his work, and as such he's made Meukow's signature pouncing panther a one-of-a-kind. A truly striking Cognac to own.

The history of Meukow dates back to the mid-19th Century, when brothers Gustav and August-Christophe Meukow from Silesia were sent to France in order to procure Cognac for the Russian Tsar Alexander II. After years of searching for the finest eaux-de-vie, they eventually decided to set up their own distillery in 1862. At first, their only customer was the Tsar himself, but the two brothers soon began to make Cognac of considerable quality, winning over the hearts of people around the world. Today, Meukow Cognac is available in over 80 countries. Cellar Master Anne Sarteaux has been with Meukow since 2007, preserving the traditional expertise that has been passed down from generation to generation.

The signature panther motif has adorned Meukow Cognac bottles since 1995 and thus become their unmistakable trademark. For this reason, it’s often referred to as the ‘jaguar spirit’.

The Meukow Arima Cognac comes in a white bottle with the panther motif embossed on the glass. For this edition, the panther has been decorated with an artistic black design inspired by tribal tattoos, including an image of Bunji Garlin’s native Trinidad and Tobago.

How to Enjoy Meukow Arima Cognac

Like any classic VSOP, this is a great Cognac to sip neat from a tulip glass or a tumbler with ice. Try mixing it with soda or ginger beer for a long drink - perfect for sipping on a beach in the Caribbean...

I first came upon the Meukow cognac by accident. We were in Gibraltar and I saw this beautiful bottle with a black panther on it. Not the best way to buy a cognac I know but it was a great find. A few years ago we were staying near cognac and arranged a visit to the distillery. We had a in-depth guide...

Войдите в систему с помощью Facebook
Нет учетной записи? Создайте его здесь
Товар добавлен в список желаний
Product added to compare.
To give you the best possible experience, this site uses cookies and by continuing to use the site you agree that we can save them.  Our Privacy Policy
Вам необходимо войти в систему или создать учетную запись