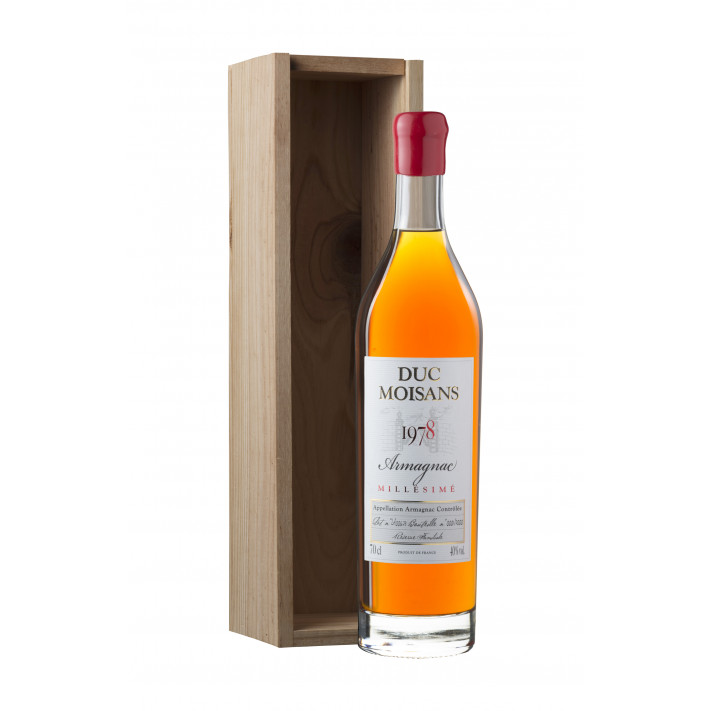 The Armagnac Duc Moisans Millésime 1978 is a vintage Armagnac produced from grapes harvested in the autumn of 1978. It has been aged for decades in fine-grained oak barrels, allowing the eaux-de-vie to develop a striking color, depth of flavor and concentrated floral aromas. This is a ‘très vieille’ reserve, having been aged significantly longer than a traditional XO.

Single harvest Armagnacs such as this represent beautiful snapshots of the past, giving a glimpse into the individual characteristics created by variations in rainfall, cloud cover and temperature. The 1978 harvest produced light, slightly dilute wines that benefited greatly from distillation. Concentrated first in the column still and then in the cask, the result is an Armagnac of great complexity with a marked hint of rancio.

Armagnac is a grape brandy produced in the Gascony region of south-west France, between the Adour and Garonne rivers by the foothills of the Pyrenees, as it has been since at least the 15th century. The terroir here is a mixture of sand and clay, spread across rolling hills drenched in sunshine during the long summer - resulting in dark, rich and rustic eaux-de-vie with concentrated aromas. Traditionally produced using wines made from Colombard, Baco Blanc, Folle Blanche and Ugni Blanc grapes, Armagnac is distilled in column stills rather than pot stills, and distilled only once. The resulting spirit is generally of a low ABV - as low as 52% - and is then aged in oak barrels before being bottled.

The tall, classic bottle - reminiscent of styles popular during the 19th Century - features an elegant label with the vintage prominently displayed. Each bottle is individually numbered and comes sealed with red wax. Presented in a simple and elegant wooden box, this release makes an excellent gift for anyone who wants to celebrate a 1978 birthday or anniversary.

Like most other vintages, this expression is best served as a digestif. For an indulgent after-dinner treat, pair with pastry desserts, strong Colombian coffee or perhaps a Cohiba cigar. Pour into a tulip glass, but let the spirit rest up to a minute before taking a sip, to allow its aromas to fully develop. After decades of waiting, it would be an injustice to rush this tasting experience.