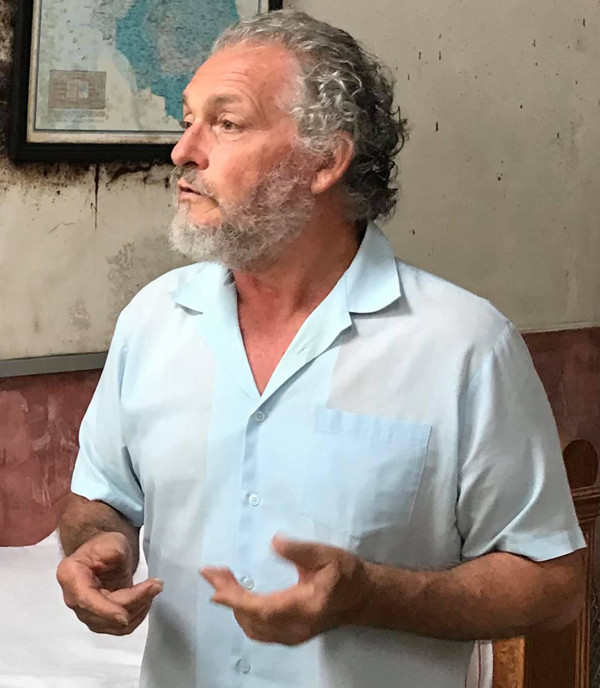 The mysterious man behind the brand

Every Cognac devotee is familiar with Navarre, even those who are new to eaux-de-vie have heard of the iconic house, yet only a few have had the pleasure of getting to know the man behind the brand.

At the helm of the renowned house of Navarre is Jacky, great-grandson to Pierre Navarre who founded the company. It is Jacky Navarre who has taken the brand from merchant supplier to the esteemed independent producer it is today.

Discover the Cognacs
The Navarre Story

Jacky Navarre is the fourth generation distiller of Cognac Navarre and the first member of the family to begin bottling and selling his own Cognacs. However, although Jacky brought his Cognacs into the limelight, he himself has chosen to retain the air of mystery that his family had cultivated over the years.

Still to this day, the Navarre brand remains offline; there isn’t much time left in the day for managing websites when you’ve got a vineyard, distillery, and brand to run.

So without being able to rely on the trusty detective tool that is the world wide web, we visited him and talked to Jacky to discover more about the enigmatic man and his wonderfully unique Cognacs.

The Navarre range consists of just three Cognacs, two Pineaus and one liqueur, a limited selection of meticulously crafted products that we wanted Jacky to delve a little deeper into with us. Jacky carefully selects his aging phases according to the end product he is curating and the qualities that he wishes to evoke. His three Cognacs are aged for 20, 35, and 50 years, meaning even the youngest far exceeds the highest age category of XXO. Through this small series of just three Cognacs, Jacky manages to demonstrate the vast range of flavors and aromas that are possible even once you have left official age classifications far behind.

A fruity and multifaceted Grande Champagne blend that has been aged for half a century. As Jacky points out “the Souvenir Impérial at 50 years I think is the peak of aging.” The eaux-de-vie is extremely aromatic with notes of exotic fruits such as papaya, passion fruit and guava, the finish concludes with hints of sandalwood and walnut oil.

"The Souvenir Impérial at 50 years I think is the peak of aging."

"I've read that Navarre doesn't use boise or caramel, which is hugely surprising as the colour is quite dark and the style is one I associate with that approach. For the price, this is an absolute bargain."

A master blend of eaux-de-vie from 1965 up to 1979, it has been reduced using natural evaporation and at an average age of 35 years, “there is a very important element for the eaux-de-vie that appears in the rancio flavor.” Just as Jacky suggested, there is an explosion of rancio like no other with this Cognac, accompanied by nutty and chocolate notes.

"There is a very important element for the eaux-de-vie that appears in the rancio flavor."

A quite extraordinary XO Cognac bottled at a cask strength of 45% ABV. As Jacky said “With the Cravache D’Or, it’s a Grande Champagne brandy that is 20 years old. 20 years of age is the moment when Grande Champagne’s start to flourish” and you can certainly appreciate that with this Cognac. This palate presents a complex blend of fruit and spices with a hint of herbs.

All three of Navarre’s Cognacs are Grande Champagne blends, and Jacky chooses to perform the blending after the eaux-de-vie have already matured for many years in exclusively Limousin oak barrels. Limousin oak is known for its coarse grain which contributes more tannins to the eaux-de-vie and results in stronger flavors and rich vanilla notes. The aging takes place in the Navarre cellar, the entrance to which boldly bears the reminder “Cognac is the liquor of the Gods.” Due to the close proximity to the Charente river, the cellar is exceptionally humid which causes the aging process to slow down and encourages the evaporation of alcohol, leading to extremely well-rounded Cognacs.

The natural capabilities bestowed upon Navarre’s cellar mean that both the Vieille Réserve and Souvenir Impérial have undergone natural reduction and come in at an ABV of 45% and 40% respectively. Jacky Navarre on natural reduction:

"Cognacs that have been reduced naturally maintain more body and length in the mouth, there is a much greater concentration in the flavors."

Jacky also bottles each of his Cognacs brut de fût, meaning they have not been filtered or refrigerated, and instead embrace nature’s influence.

Navarre’s Pineau collection consists of a stunning Pineau Rosé, crafted from Grande Champagne eaux-de-vie and characterized by fruity notes, this bottle would be idyllic on a blissful summer day. The other offering in the range is a Pineau Vieux which has spent a minimum of five years aging in oak and presents distinct rancio nuances.

The final product in Navarre’s range is a little different. Monsieur Navarre on his Cognac Coffee Liquor:

"Makeda is the alliance of coffee and Cognac. An alliance that works very well."

That's Jack'y comment on his Cognac Coffee Liquor, and we can’t help but agree. Produced using Grande Champagne Cognac, blended with a natural extract of Mocca coffee and cane syrup; the result is a rich and powerful coffee liqueur that Jacky found inspiration for from a trip to Ethiopia over 40 years ago, where he fell in love with Reggae music and the flavors of the country: Navarre Makeda Coffee Liquor.

The Man behind Navarre

Jacky Navarre always knew he was destined to distill Cognac and one day made the decision to not return to high school, instead entirely dedicating himself to his craft. However, despite a lifetime of experience and a renowned family history of producing superior Cognacs, Jacky remains a humble man who does not set himself apart from his fellow craftsmen.

Jacky’s palate is an international one, and he takes much of his inspiration from other countries and cultures that he visits and studies. Although a Cognac connoisseur by trade, outside of his profession Jacky enjoys tasting a wide variety of wines from around the world, spirits from Armagnac to Rum, and liqueurs of all different flavors.

So for this man of traveling taste, our following question felt like an obvious one, “If you arrived like Robinson Crusoe, all alone on an island, and you had three things you could bring, what would they be?” Jacky Navarre’s answer?

The essays of Montaigne, a pencil to draw, and a bottle of liquor.

The artisanal Cognac house of Navarre has roots in the region going back to the beginning of the 14th century, and experience in the production of Cognac since around 1750, so you can certainly count the Navarre family as one of the original pioneering Cognac houses.

Jacky Navarre resides and distills in Domaine du Renclos, the property that his family has owned since 1811. The Maison and its vineyard are located in the Grande Champagne region and Jacky has been learning the art of Cognac production here since he was just a boy, following in the footsteps of the three generations before him.

When Jacky first took over Cognac Navarre he did as his predecessors had, cultivating the vineyard and distilling his Cognac to supply larger houses. However, Jacky’s vision had always been one of independent production and so made the decision over 25 years ago to move away from the larger houses and instead bottle and sell his own eaux-de-vie.

Jacky Navarre handles every aspect of the production himself, from the vineyard cultivation, to the harvest, to distillation, aging, blending, and bottling. This year he has 12 hectares of vineyards in production, which he recently finished harvesting. The vines are predominantly of the Ugni Blanc variety, with a small portion of Colombard and they undergo as little chemical interruption as possible.

Let nature do most of the work, and the rest will follow.

– Jacky’s rule of production is quite simple

All other images: © Else Stoker