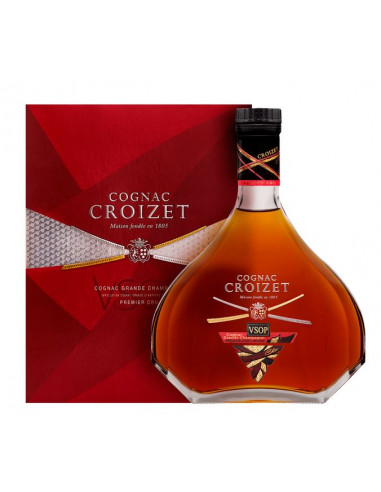 Celebrating over 400 years of history, when the Croizet family first owned vineyards in Cognac, this is a rich and sumptuous expression to represent the House of Croizet. The award-winning Croizet VSOP Chic Cognac has been aged for well over the minimum four years required, giving it balance and a great aromatic richness of caramel, leather and chocolate. Simply sublime.

The bold, curved lines of the decanter make it clear that this is a premium product, while the heavy base makes it a formidable bottle to hold and pour. The red and silver presentation box perfectly matches the stylish label and foil covering the cork stopper.

Set other Cognacs aside to mix in cocktails or long drinks; this is one to sip slowly. The indulgent butterscotch and chocolate notes make this VSOP perfect as a digestif to enjoy late into the evening, ideally in front of a roaring fire.