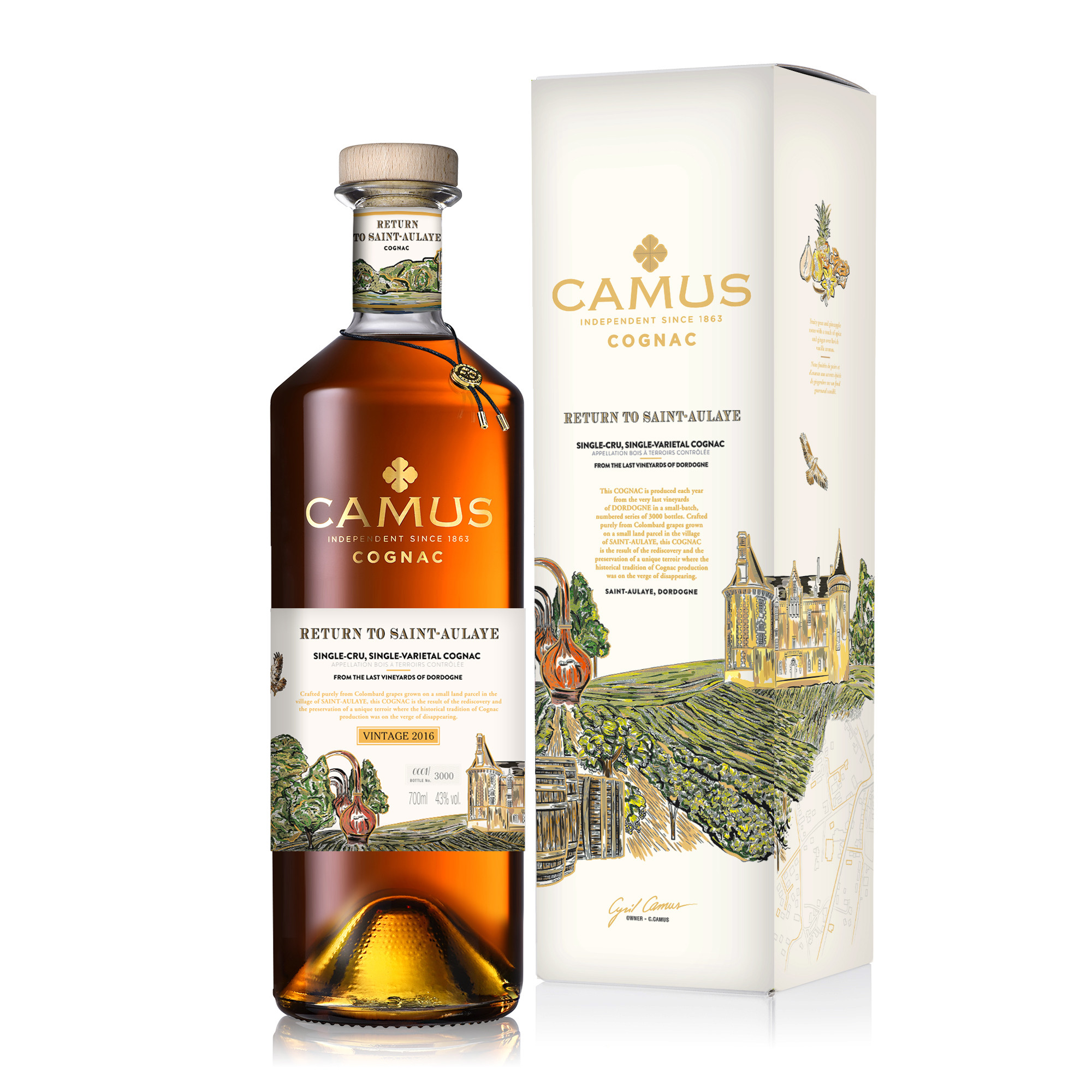 SINGLE-CRU, SINGLE-VARIETAL COGNAC FROM THE LAST VINEYARDS OF DORDOGNE

Return to Saint-Aulaye is the first Cognac produced every year from the last vineyards of Dordogne. The Cognac is limited in stock as Camus has only produced a numbered series.

The village of Saint-Aulaye has appeared in the delimited Cognac production area since 1909, even before the AOC was made official in 1936.

The Saint-Aulaye village council turned to Camus as the perfect partner to craft a Cognac that would reflect the real essence of the terroir.

Discover all about the history, production process and the relationship between Camus and Saint-Aulaye.

Palate: Fragrant fruity notes of pear, pineapple and a touch of spice.

Nose: Warm and lavish vanilla aromas with hints of ginger and walnut.

Location of the Dordogne in France

The story behind the Cognac

Crafted purely from Colombard grapes grown on a small 1.5-hectare parcel in the village of Saint-Aulaye, RETURN TO SAINT-AULAYE is the outcome of a decades- long project to rediscover and protect a unique terroir because, although geographically part of the Cognac AOC ever since it was first mapped out, the historical tradition of Cognac-making was on the verge of disappearing from this area.

The idea behind this Cognac comes from a synergy between the House of CAMUS and the village council of Saint-Aulaye. This latter started to scour – at the end of the 90s – local historical archives to find authoritative sources on the region’s Cognac producing tradition, which dated back to the nineteenth century. This task enabled a meticulous selection of areas to plant new vines, according to the geological nature of the land and the way this would have affected the aromatic profile of the final distillate.

Once the vineyards became productive, the council decided to entrust the Cognac production to Camus. A further research was conducted by the Camus team, leading to the revival of certain traditional practices, such as using barrels made with wood from the local Double forest, chosen for the highly aromatic maturation they offered.

After years of study, development and ageing, the final blend of the 2016 vintage is brought to us now as a limited edition.

Return to Saint-Aulaye truly represents a celebration of this rich terroir and a unique opportunity to explore an expression of the Cognac Appellation that is atypical, and yet rooted in history.

The Terroir and its History

The Dordogne department – geographically third largest in Metropolitan France - owes its name to the river that crosses its beautiful hilly landscape. The region is historically associated with the ancient Count of Périgord and flourished under Charlemagne.

It still evokes in the collective mind today refined gastronomy and picturesque medieval architecture. Nestled between rural areas of pine forests and truffle farms, the village of Saint-Aulaye is a small architectural jewel in the Périgord landscape, built as a bastide in 1288. It still retains the typical elements of a medieval fortified city, with its castle made of limestone, the remains of the city walls and the communal oven.

The production of Cognac in this area has distant origins and is documented for the first time in the topographic maps of Pierre de Belleyme - dating back to 1785 - which attest to the presence of large areas dedicated to the cultivation of the vine in the terraced areas surrounding the fortified city. As further evidence, the village of Saint- Aulaye has appeared in the delimited Cognac production area since 1909, even before the AOC was made official in 1936.

The relationship between Saint-Aulaye and Camus Cognac

The progressive change in the agricultural landscape of the Dordogne region led to a gradual decline in Cognac production towards the middle of the last century, to the point where it was running the risk of disappearing entirely. By the early 90s, the total surface planted with vineyards for Cognac in Dordogne was reduced by more than 90%, which had a severe impact on the survival of its production in this specific area.

In 1999, the Saint-Aulaye Council decided to take action. Local institutions launched a mapping of the most suitable areas and supported the replanting of a 1.5-hectare plot of Colombard - the rarest among the grape varieties allowed in the Cognac Appellation due to its low yield, but at the same time one of the most sought after, due to its aromatic qualities.

With a clear picture in mind of the future Cognac production, the Saint-Aulaye village Council turned to Camus as the perfect partner. Thanks to the brand’s credentials on research and innovation in the category, Camus would craft a Cognac to bring to life the real essence of the terroir.

The 2016 vintage was particularly generous from an aromatic point of view: the vinification stage happened in September - with fermentation into alcohol lasting about a week – producing a fragrant wine, with a high concentration of isoamyl acetate, and highlighting notes of candy, pear and banana. Distillation took place in November without waiting for malolactic fermentation to happen and thus preserving a maximum concentration of aromas into the wine.

As per Camus' tradition, wines were distilled on the lees. The selection of the heads during the second distillation was limited to 10 liters with high aromatic potential.

After distillation, the eaux-de-vie matured for four years in French barrels made of fine-grained local oak from the Double forest surrounding the Saint-Aulaye village. Half of the barrels were new, and half were second-fill, in order to obtain subtle woody aromas and preserve the aromatic freshness of the Cognac. During the whole maturation process, the barrels laid in the tower of the Saint-Aulaye castle, in a damp atmosphere.