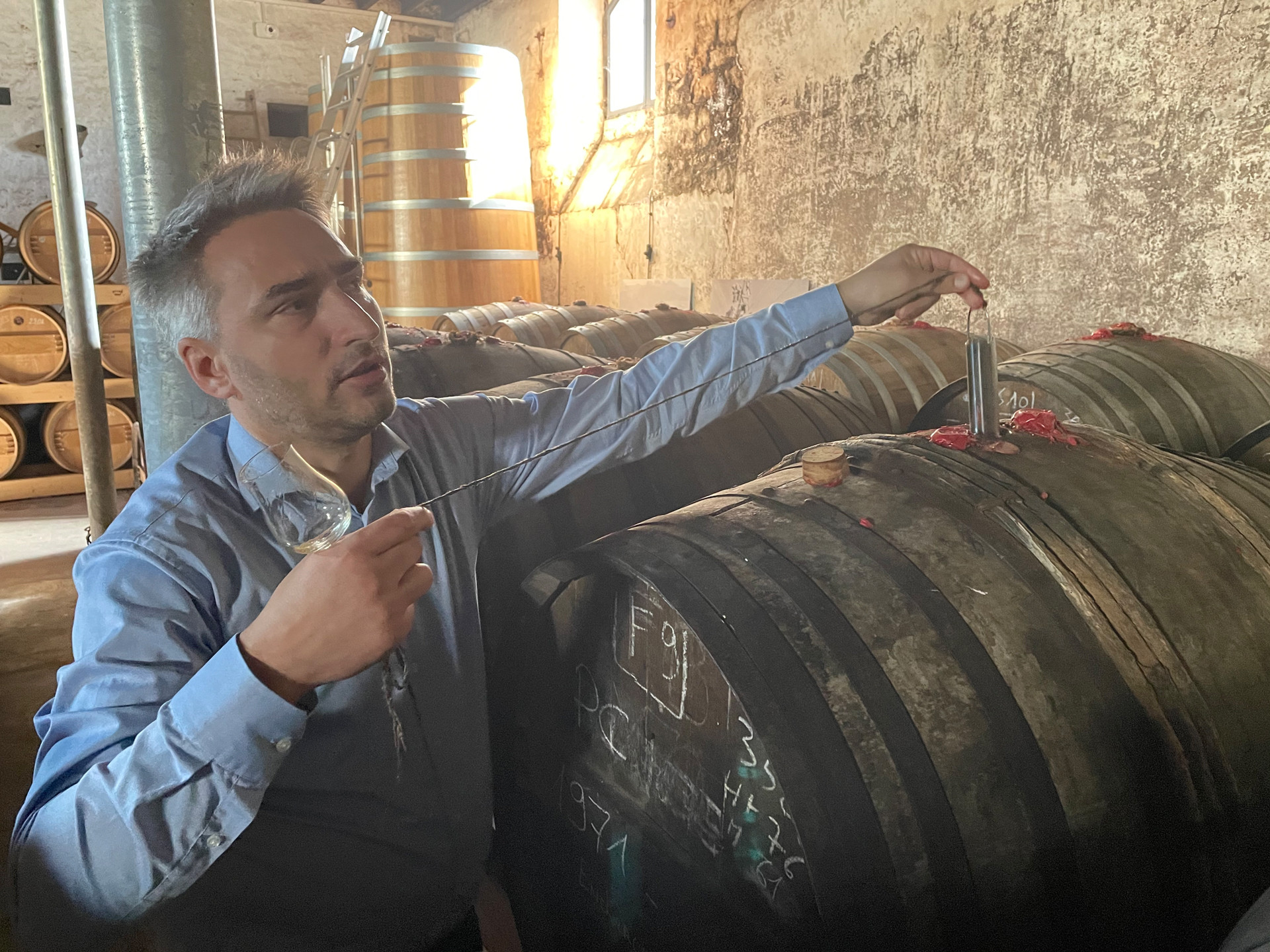 Our much anticipated second podcast is with Guilhem Grosperrin, whose father established Grosperrin Cognac in 1999. Since Guilhem took over the company in 2004, he has been instrumental in enhancing the eaux-de-vie collection of the house and expanding its network and customer base to far beyond just France.

In Guilhem’s interview with Max, he takes a deep dive into how the business has transformed into what it is today and the steps that it took to get there.

"If you drink a 30 year old Fins Bois or a 25 years old Bons Bois it can be better than a Grande Champagne."

As a passionate Cellar Master, Guilhem also takes us on an educational journey, discussing the evolution of eaux-de-vie and providing his honest opinion on the six crus of Cognac. The second Cognac Expert podcast gives a unique insight into the man behind Grosperrin today, it is an interview packed with secrets of the region and the Cognac trade, as well as gripping tales that give us a taste of what it is like to hunt for hidden treasures of eaux-de-vie.

Subscribe to our podcast - Now available on Spotify & Apple.

Jean Grosperrin founded the house in 1999

Guilhem Grosperrin took over in 2004

The independent Cognac house of Grosperrin is a relatively new one in the region, having only been established in 1999 by its founder, Jean Grosperrin. Grosperrin is based in Saintes which sits between the terroirs of Fins Bois and Borderies and it is today run by Jean’s son, Guilhem, who took over in 2004 at just 23 years old.

Guilhem’s mission is to discover producers all across the region in order to create truly unique Cognacs from the six crus. This vision was made possible by the fantastic relationships Jean Grosperrin built with producers, and that Guilhem has since built on and expanded.

Today, Grosperrin works with over 150 Cognac producers, from which Guilhem will meticulously select barrels to craft into exquisite end bottles.

Cognacs featured in the Podcast

Grosperrin N°52/22 Fins Bois Cognac is a rare blend that comes from the commune of La Brousse. The producer was born in 1952 and still has Cognacs that were distilled by his father and grandfather. This Cognac is the result of the blending of two batches selected from the Fins Bois cru of Cognac. The original producer blended the batches himself before bottling the finished Cognac as a Grosperrin product in the year 2000. Standing proud as a remarkable one-of-a-kind piece of artisanal history, this Cognac has a tale or two of its own to tell. Discover its story through an immersive tasting that will take you on a journey of the senses sip by sip.

Grosperrin Vintage 1989 Fins Bois Cognac comes from a vineyard located in Brie-sous-Matha, a village in the heart of one of the most beautiful landscapes of the Saintonge wine region, on clay-limestone soils. Made up of eaux-de-vie of the Fins Bois cru, the harvests from the end of the 1980s and the beginning of the 1990s were reserved due to the economic crisis that hit the region hard from 1992.

Featured as one of the exclusive Cognac de Collection curated by Grosperrin, the Grosperrin 1973 Petite Champagne Vintage comes from a family of notaries who have settled in Cognac for several generations. Today, Grosperrin are dedicated to the selection and the ageing of old cognacs and their distribution. The 1973 Vintage Cognac from the Petite Champagne is a testament to the cru, which is renowned for taking 20-30 years to age fully. This cognac from 1973 aged for more than 45 years in casks. It is characterized by a maritime climate and chalky soil.

Discover more about the Grosperrin Vintage 1973.

Rustic, with its own unique charm, the Grosperrin Millesime 1990 Cognac is a beautifully balanced choice with an enticing subtlety. Crafted with the 1990 harvest from the Fins Bois terroir of the Cognac region, it originates from the delightful town of Bonneville, located between Rouillac and Aigre. A part of a range of Grosperrin vintage cognacs, it is a charming selection to enjoy.

Discover more about this 1990 Vintage from Cognac Grosperrin.

The Grosperrin N°58 Fins Bois Cognac is a very rare Cognac that was acquired after the death of the winegrower. Jean Grosperrin bought this Cognac from his son in 1999, and the cask was then stored in the Grosperrin cellars on the banks of the Charente River. Due to its very high quality, it was isolated among the others, and in 2017, it was bottled and placed in the exclusive Cognac de Collection.

Jean Grosperrin had worked in the wine industry for many years – firstly as a distiller in the early 1980’s in the North of France (Lorraine), then as distiller in Cognac, and finally as a broker from 1991. He moved into the position of wholesale in 1994, and in 1999 that he started to bottle his own casks. This meant that he not only had created some valuable relationships with winegrowers in Cognac, but he also became well known by the many merchants who sold the finished products.

It was during these dealings that he became aware of quite how many rare and prized cognacs were being stored in the many cellars of the Charente. A few barrels of old cognacs tend to be handed down over the generations, meaning that there truly were some treasures to be discovered that harked back to the days before modern technology changed wine production to what we know today.

Using his many contacts in the business, this meant that Jean had a privileged pathway into being able to purchase some of the oldest and most sought after eaux-de-vies that had been produced over the decades. Jean had to stop working in 2003 due to health reasons.

"I would love only organic cognac but when you bottle cognac from the 70s and 60s it's simply not possible."