Consisting of 30 hectares of vineyards in the Fins Bois growing area as well as some located in the Petite Champagne region, the estate of Pierre Croizet Cognac spans back in time and over the generations. This family run cognac house uses organic methods to farm the vines as much as possible, and has had a distinctly female influence throughout the years. This is something that both past and present members of the family are proud of. Leopold Croizet, who heads the house today, has inherited many business skills from his mother as well as other influential members of this traditional cognac producing family. 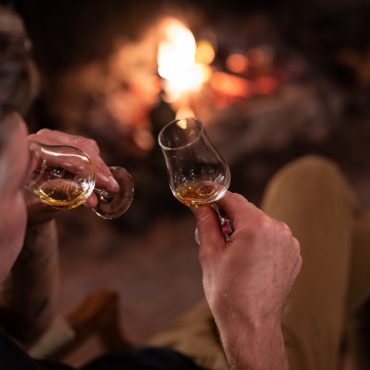 The house of Pierre Croizet Cognac has a history that reaches back to before the time when the Phylloxera crisis devastated the vineyards of France. One phenomenon that makes Pierre Croizet Cognac stand out in the distinctly masculine cognac world is the fact that there have been many strong willed and influential female members of the family that have been in charge. Not only that, but they occupied extremely authoritative positions in the business, and have helped steer Pierre Croizet Cognac to where it is today.

Back when Phylloxera cast its shadow over the vines of Cognac, it was Amelina Croizet who was pivotal in ensuring that the family’s vineyards survived. She passed this fighting spirit on down through the generations, and many of the Croizet women proved to be determined and successful businesswomen. The knowledge gained over the years has been kept a closely guarded secret, and passed down from father and mother to daughter and son. One thing that everyone has had in common was to keep the traditional methods firmly in mind, whilst still advancing the cognac making process as technology advanced.

In the mid-1900s, Pierre Croizet Cognac took the step of selling their wares to the general public – a process that still continues today.

Cognac Pierre Croizet is today in the capable hands of Leopold Croizet. He is the latest in a long line of grape growers to combine both tradition and progress. As such, he has recently acquired further vineyards, and these reach across the borders of the Fins Bois region to cover an area of the Petite Champagne. Not only does this allow the house to produce eaux-de-vie from two very different areas, but also allows them to create cognacs in two distinctly different ranges.

The Pierre Croizet Cognac house uses only organic fertilizers on the land, whilst still keeping firmly to the traditional methods of their ancestors. However, whilst tradition is important, so is technology, and in 2010 Cognac Pierre Croizet developed a vital presence on various social media sites, such as Facebook.

The house also produces a Pineau des Charente. And this won first prize in the Concours des Saveurs Agricoles du Poitou-Charentes in 2009.

There is no information available about visiting Cognac Pierre Croizet.