Owned by the family Vallet for six generations, Chateau de Montifaud Cognac boasts 125 hectares of vineyards that are located in both the Grande Champagne and Petite Champagne growing regions. The house produces a large, high quality range of cognacs – including various vintages from years that have had an exceptional harvest. One family tradition that Cognac Chateau Montifaud is proud to follow, is that of when a new baby boy is born to the head of the cognac house, that part of the cognac created from that year’s harvest is set to one side. This is kept for a varying number of years, but may only be sold by future generations. 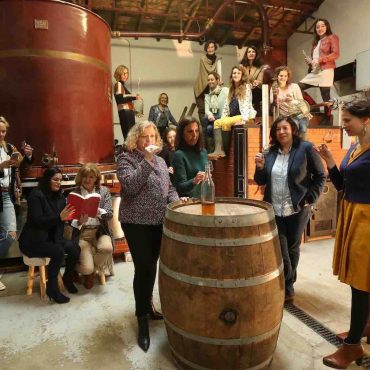 A history of 6 generations

Chateau Montifaud is the epitome of a family brand; controlling all processes of Cognac production from harvesting the wine stock, all the way through to selling its own products. Their young vines are picked by hand, and the rest of the vineyard is harvested mechanically. Today, their vineyard extends over 125 hectares in the two premium growth crus of the Cognac area - the Grande and Petite Champagne.

The quantity of active limestone is key to the success of the Fine Champagne, with the high chalk content playing an important role in producing fantastic eaux-de-vie. Through respecting the savoir-faire of previous generations, they continue to innovate and adapt to new technologies. “Everyone in the family loves, lives and breathes Cognac. It’s truly instinctive that we do what we do.” says Catherine Vallet, of the 5th generation. “We have more of a desire to pass on the desire for Cognac as opposed to selling bottles.”

According to the family tradition, when a son joins his father in producing Cognac, a part of the eaux-de-vie distilled in that year is set aside and will only be sold by future generations. This indicates the priceless quality of the Chateau de Montifaud Paradise cellar.

beginning The vineyard, of just 3 hectares, was created by Augustin-Pierre Vallet around 1837. A decade later, it was over a dozen hectares in size and Augustin set up three pot stills of 3 hectolitres each to distill Cognac - giving him a position of ‘privilege’ to build up a fortune. There were few landowners in the region that distilled their own wine at this moment in time. He, therefore, distilled for both himself and surrounding neighbors.

The Château Montifaud was unfortunately not left indifferent to the phylloxera crisis of the 1870s. In 1878, their vines were mostly destroyed, which was followed by a hard period for the family business. The large stocks of Cognac produced by Augustin and Pierre helped them to rebuild the estate.

The era of Maurice Vallet

Maurice, the son of Pierre, began distilling with his father in 1904. The Chateau Montifaud Heritage “Maurice Vallet” Cognac is a byproduct of the blends from this era. It was an era of growth for the Cognac house, thanks to the distillation that still was called « privilège ». This allowed Pierre and Maurice to set up two new pot stills of 12 hectolitres each (stills later used by Louis and Michel, and then renovated by Laurent in 2011).

The economic situation was particularly challenging as a result of the First World War between 1914-18. Maurice and his brother left to go to war, while Pierre looked after the 35-hectare estate. While selling his Cognac to wine merchants, his reserved a part of his Paradise cellar including 10-liter kegs and bottles - it was thanks to this stock that a new era for Chateau Montifaud began. He was one of the first winegrowers in the region to market his own products, selling his Cognac in France, Belgium and Switzerland.

In 1940, the situation darkens once more with the onset of the Second World War. Maurice was able to take care of the vineyard up until the day of 31st December 1943, when the city of Cognac and its region were heavily bombed. The village of Jarnac-Champagne was hit and 80% of the family estate was destroyed. By luck alone, the storage cellars located 1 km away were spared from the attack. Louis then took over the vineyard in 1947 and distilled his first cognac. He then married Micheline and had two children, Michel-Maurice and Nicole. Together, little by little, Louis and Micheline rebuilt and enlarged the vineyard, rebuilt the installations and expanded the business across foreign markets. They have developed bottle sales in new markets such as Germany, England, and the USA.

In 1972, Michel joined his father on the estate and continued the family tradition of storing some of his own Cognac for future generations. Then, in 1973, Louis and Michel created a new distillery set-up of two 25 hectoliter pot stills. In the following year, 1974, Michel and Catherine married and had two children, Laurent-Louis and Nathalie. During this same period, the vineyard reached the size of 48 hectares. Michel and Catherine wanted to sell their entire production in bottles and therefore, began to expand to new foreign markets and develop the Château Montifaud range. Their new commercial partnerships reached across Europe, Canada, Scandinavia, South Africa, Asia, the Baltic States, Russia, and Ukraine.

In 2000, Laurent joined his father and grandfather on the estate. At that time, the vineyard extended over 60 hectares in the Grande and Petite Champagne terroirs. A part of the 2000 harvest was also set aside for generations to come. Laurent married Elodie in 2004 and they have two daughters, Loïs and Flavie. The following years have seen the vineyard grow to 90 hectares, remaining within the Fine Champagne. In 2007, Michel and Laurent have had built a new state-of-the-art blending cellar to continue innovating the quality of the family Cognac. In the same year, Elodie began working with the family at Château Montifaud.