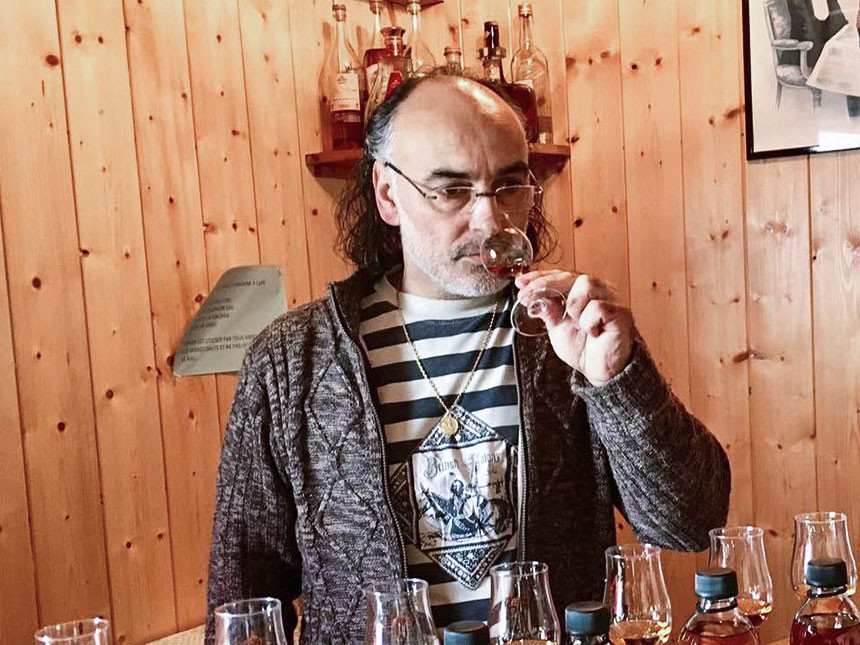 Cognac Chollet under the Spotlight

And a 60 Years Old Cognac

In our quest to expose the hidden gems of rural Cognac, this time, we’re shining some light on Chollet Cognac, a lesser-known brand in the Cognac-sphere. Delve into the world of the Chollet family, and their expertise alongside the maison’s impressive collection of Cognacs with our deep dive below.

Today, Christophe runs the family Cognac House and is proud to present Chollet 3945, a Cognac that is over 60 years old. There are only a few bottles left, so don't miss the opportunity to taste history.

Read the Story
Discover the Cognac

The Chollet story starts in 1952, when Jeannine and Jacques Chollet, who were recently married, set their sights on a small farm in the commune of Boutiers St-Trojan, not far from the heart of Cognac. The farm featured around 10 hectares of land, sufficient for 80 lots, but at the time, it had very few vines. At first, the pair struggled to make ends meet as despite their strong companionship and heady drive to pour all they could into their work, with only two workhorses (named Mirka and Baillard), it proved extremely difficult to earn a living solely from working on the land.

Never the quitter, Jacques, with a fighting spirit, shining optimism and fierce rugby player mentality, knew that he needed to take a few risks in order to invest in and develop the business. So he started by purchasing; a herd of cattle, some pigs and (of course!) planting some vines. Then, in 1960, the first-ever private telephone in the area was installed at the Chollet farm and home, as well as the first Renault D30 tractor. This provoked scepticism from other local villagers, who questioned the new technological advances supported by Chollet as they feared for their financial survival. Nevertheless, despite the initial controversy, these investments very quickly began to pay off.

With new land and vineyards becoming available that proved to be ideal for what Jacques needed, the manual and agricultural work was taken on by Jacques. At the same time, the business administration and household responsibilities were managed by Jeannine. In the meantime, the family was growing bigger and bigger, with eight children now under their wing.

By 1971, Jacques and Jeannine were ready for a new challenge, something bigger and better than ever. So, with tools in hand and with the help of their family and friends, they built their own distillery. This enabled them to distil for both wine growers and merchants.

Once the distillery was finished, the first Cognac was produced, and the du Planty Distillery was officially alive and roaring. With this new advancement on the farm, the pair could now turn to broaden their business through trade, and so they proceeded by launching the bottling business in 1977, which led to an expanded range of wines and Cognacs.

The rest is still unwritten…

Nearly twenty years later, in 1995, Jacques and Jeannine separated the wine and agricultural activity from that of the business and passed on the vineyard to sons Bertrand Chollet and Christophe Chollet to take over the management of Chollet Cognac.

Retiring in 2008, Jacques and Jeannine were proud to hand over the family business to its second generation, who is currently writing its next chapters. Having worked at their parents' business, Bertrand, Christophe and their other siblings congratulate their parents, the founders of the business, for the work they have accomplished and the values they passed on along the way.

This cognac, made from brandy from the Fins Bois region, was developed during the Second World War. It was distilled in a 300-liter copper still, heated with wood and aged in oak barrels until November 2009, more than 60 years.

This historic Cognac is only available in a limited edition, and each bottle is uniquely numbered for an extra special touch. The Cognac comes without a wooden box.

Chollet Altesse XO Extra: a strictly limited XO Cognac. Christophe from Chollet has only 40 bottles left - when they're gone, they're gone.

This Cognac is a pure Grande Champagne delight, this fruity, round, elegant offering thrills in every aspect. A display of perfect harmony, it’s an embodiment that is complex, yet balanced with a powerful essence you won’t forget. It’s the ultimate reminder of why the chalky soils of the Grande Champagne are referred to as the 'premier cru' of the region. A selection you certainly won’t forget.

See below for the Chollet Altesse XO Extra.